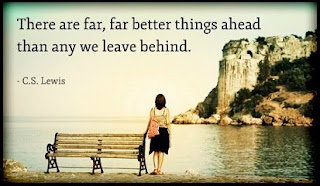 C.S. Lewis is one of my favorite novelist, poet, and lay theologian.  I find his mind fascinating especially the way he can cause ones mind to think deeply by writing one sentence thought provoking quotes.  But I love not only the words he writes but sometimes people put pictures with the quote and this one pulled me in. I was drawn to the vision of the woman standing next to the bench. She gazes across the water I wonder what she's thinking?  I wonder if she went there to think or if she just randomly wandered into this area. I think she goes to this place often to think deeply.  Maybe she's in a transition period in her life and by looking off into the open water seeing nothing visable on the other side perhaps her mind expands and she imagines.  What do you think she imagines? We will never know but we can imagine in our own mind what she might be thinking and that will cause us to think deeper.

I think this quote goes hand in hand with the quote at the top of the page. Because if you believe that there are far far better things ahead than any we leave behind...and if we are never too old to set another goal or to dream another dream then maybe the woman in the photo went to this spot to think deeply about moving forward in her life.  Maybe she knows that she will be leaving someone, and somethings, behind if she goes forward. Maybe it's time for her to set another goal and dream a new dream. We can only imagine her thoughts.

Life is full of hellos and goodbyes - But keep in mind that every new hello can start a new chapter in your life, and every goodbye can leave you with new energy to go forward with renued strength and determination to grow, to expand and to build your own happiness, and achieve your own goals.

Life is too short to miss your destiny.

I wish this for you...that your dreams come true as you go forward to achieve your full potential, trusting God. He has the perfect plan for your life.
Posted by Bunny Leach at 9:18 AM No comments: