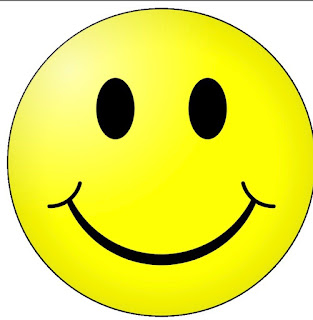 My daughter Nicki loved smily face. She had smily face stickers and a shirt, and she drew Smily on her notes or when she wrote letters. After she died I became fonder of smily face because it was something happy that reminded me of Nicki. So after she died Smily had a deeper meaning for me! Losing her led me to research smily face and I learned that the original version of smily face was created by the late Harvey Ross Ball over 50 years ago in Worcester, Massachusetts. He came up with the image in 1963 when he was asked to create a graphic to promote confidence and enthusiasm between employees at work. That's pretty cool way to bring people together, I think! It only took Ball ten minutes to create Smily, and he was only paid $45.00 for his work. The office he worked for then created posters, buttons and other visuals of Smily in hopes that their employees would smile more often during work. Many people and large companies have tried to claim they created Smily because it's so popular, and it has been said that Smily is so basic that it can't be credited to anyone for designing it. But for me the simplicity of Smily with those big dark eyes and a huge smile have made my life happier and sunnier. And Smily helps me smile more often and that causes me to smile bigger and brighter. It's a beautiful thing when something so simple can remind us all to smile more :) And you never know who you may pass by because it could be someone who may need to see your beautiful smile, or maybe someone you work with, or a complete stranger you could be helping. So put your smily on and see what happens. I know I'm going to... Keep smiling :)  Love, Bunny